We had a special visitor this past weekend. Grandma came to visit us! 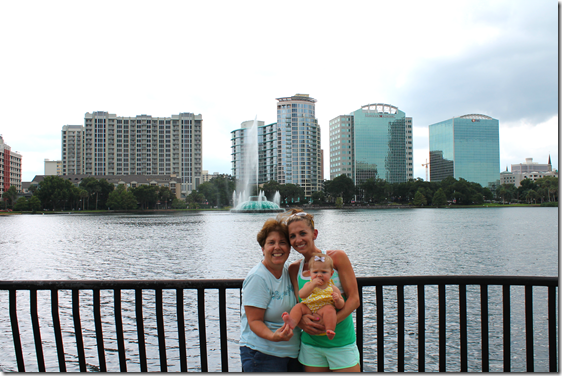 Gabriella LOVED her time with Grandma, she was SO good with her and would just sit and watch her. My Mom would move, and Gabriella would just follow her and the second my Mom looked at her she had this HUGE grin on her face. It was so sweet! 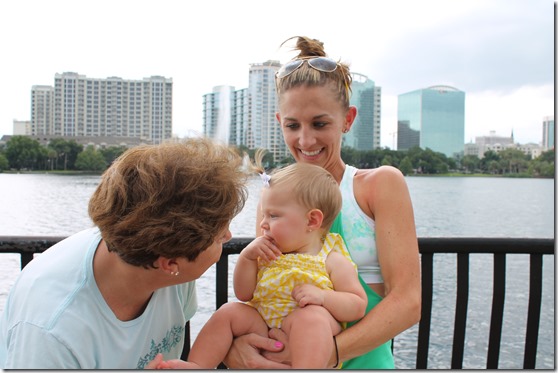 I surprised my Mom for Mother’s day with tickets to the ‘CSI Experience,’ because she LOVES the show. (is it bad that I have NEVER seen one episode?!)

It was a lot of fun! They send you along to investigate a crime scene & you have to figure out if you can solve it. We must be geniuses because we got it easily.

After solving our crime scene, we went to the Orlando outlets to do some shopping! Oh it had been FOREVER since I had a shopping day without Gabriella, it felt SO odd not having a baby attached to me.

My Mom had been saying that she wanted to get a bigger Vera Bradley bag (I got her hooked), and it dawned on me that there was a Vera outlet in the newer Outlet mall. I asked if she would want to go & she was all for it! I never turn down a good shopping day.

We were MEANT to be there. Not only did Vera have some great deals, but EVERYTHING was HALF off, just for THAT day. We both stocked up there & then I HAD to hit the Lululemon outlet as well.

Not only am I addicted to their Run: Speed shorts, but now I have a favorite top, the No Limits Tank. Addicted.

She came down from Jacksonville on Friday night & volunteered to babysit for us so that Craig and I could have a date night (we were able to meet up with some friends too- even better!). They are few & far between, so we definitely took her up on her offer!

I got Gabriella to bed around 7:30pm & we headed out. I told my Mom that she really didn’t need to do anything since she was asleep, and even if she were to wake up to just let her cry. She RARELY wakes up shortly after being put down for bed, it takes her a few hours. And even after a few hours, I told her to just let her cry if she were to wake up. (Just in case we were out longer than anticipated, which didn’t happen, but I wanted her to be aware what to expect.) 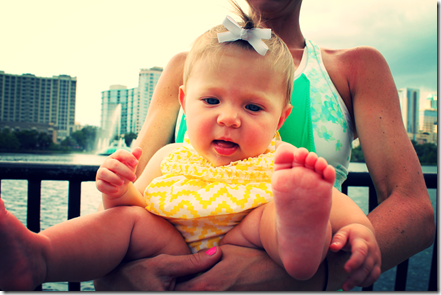 It was time. And I finally got around to being ‘ok’ with it. It took me a WHILE. I was NOT ok with letting her cry…at all. The second I heard a peep I would rush in, but then after MONTHS of hearing those peeps every 2-3 hours it was starting to take a toll on me. I was getting up at 10pm, 1am & 4am EVERY.SINGLE.NIGHT without fail. I didn’t mind, my body got so used to the lack of sleep, but it finally hit me- She is doing this out of habit. She KNEW that if she were to cry Mommy would head right in, scoop her up & feed her, which I think was be coming a comfort rather than hunger.

So a little over a week ago we did it, I should say I did it. Craig has been fine with her crying for a while. I’m the one with the issues.

10pm came & she cried. She cried for close to 30 minutes, if not longer. But I HAD to do it. Eventually she settled down & put herself back to bed until around 2am, and then I went in and fed her. Only one feeding- and she was up for the day at 6:30am.

The first few nights were hard…she cried a lot, but would settle back in & cry again anywhere between 2am & 3am, when I would go in and feed her. But anytime before that we would just let her cry. I had to turn the monitor sound off, so that we would be able to sleep- and then once she stopped I would turn it back on.

Eventually I plan on cutting on night feedings, as she is old enough. But for now we are doing good with cutting it down to just one. I wanted to give her some time to get used to only one, and then I plan on cutting the other one within the month.

I have to say, it was easier than I thought. The main thing was that I waited until MY gut said it was OK. She would have been fine with sleep training a few months ago (I mean with getting enough food- there is no need for night feedings after six months old, of course it all depends on the baby- your baby may NEED additional feedings, but she was getting enough during the day.), but I was the one that had a hard time. I felt guilty. I wasn’t sure if she actually was full because she would nurse both sides every time I went in. But since she was feedings so much, they were not as full & she wasn’t getting much. So now with the one night feeding, my boobs are FULL & she takes both sides and falls back to sleep until 6:30/ 7am! Sometimes she even sleeps until 7:30am, which is lovely- allows me some time for work. We also moved her bedtime back (to between 7:30 & 8pm), which I think is part of the later wake up time in the morning.

We still have some work to do, but this household has been getting MUCH better nights of sleep!

We wake up feeling refreshed, rather than dragging…and relying on way too much coffee to get us through the day.

It’s amazing what a few extra hours of sleep can do for a person!

Do you shop at Lululemon? If you do, what’s your favorite item?

Moms out there: When did you start sleep training, IF you did it at all?