I have come to realize that my blog has slowly turned into more of a Mommy blog. I apologize, kind of, for that. You see whenever you have children, they do turn into a HUGE part of your life. So it’s hard to NOT talk about Gabriella whenever I write a post. I also realize that not everyone is interested in what my daughter is up to on a daily basis. 😉

But I will do my best to try to mix it up a bit more- with some recipes & workouts. I have a whole list of workouts that I have made up, I just haven’t put them on here yet. They are coming!

Today I have a recipe to share with you. It’s not my own, it’s from one of my favorite baking websites that I have mentioned on here many times…Sally’s Baking Addiction. Trust me, just one look on her site & you will want to make EVERYTHING.

To be honest, I really don’t bake often, only because it’s just Craig & I and the last thing we want is a bunch of sweets laying around. But this week we have guests, my in laws are in town, and I always like to have some kind of goody! 🙂

After spotting some Easter M&M’s in the store this past weekend, I knew I had to find a recipe to use them in. 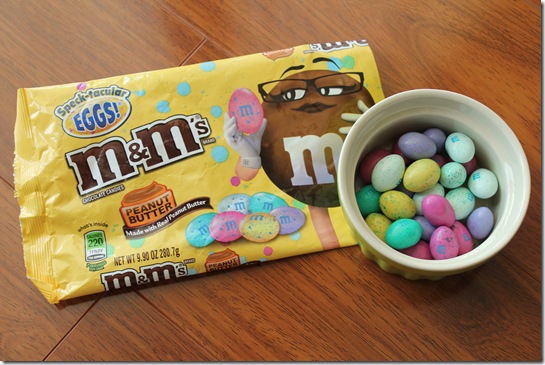 After searching around on Sally’s site, I found THE recipe- Brown Butter Pretzel M&M Blondies. Now, I was wondering after reading the recipe what kind of impact the brown butter actually made. Let me tell you, it’s HUGE. Seriously. You MUST brown the butter. It gives the blondies SO MUCH FLAVOR. I really had no idea what a difference browning butter makes to the flavor of butter.

The only thing that I changed about the recipes was the I used peanut butter M&M’s instead of the pretzel M&M’s. And to be completely honest, the only reason was because Craig & I did a number on the bag of pretzel M&M’s that I had. Oops 😉

These were FANTASTIC!! Like I said before, the browned butter is KEY!

And of course, because I CANNOT go a post without a Gabriella photo…I had to show you what she did when I put the blondies next to her, she was longingly looking at them. 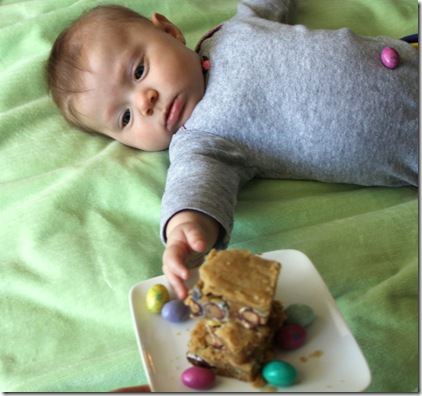 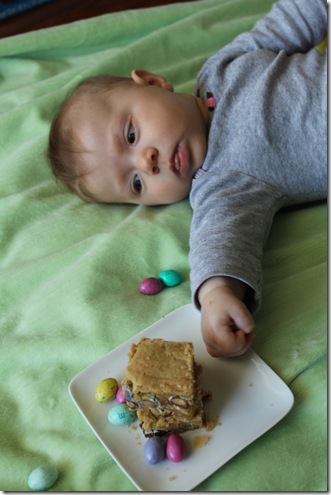 Poor girl wanted to try one SO bad.

Then she got mad at me because I wouldn’t let her have one, and look what she did. Knocked them RIGHT over. Notice that hand mid swing.

That’s the it wasn’t me Mommy! look.

Love that girl to pieces.

If you are looking for an Easter dessert, I HIGHLY HIGHLY HIGHLY recommend these. I think they would be a hit with anyone, which is sometimes hard to find with a dessert.

Have a great Thursday…some of you may have off tomorrow- ENJOY!! 🙂

Advertisement
by Holly at Holly on the Run

Well, I guess Gabriella has moved on from the ‘newborn’ stage…since she is 12 weeks old…but I think it’s no longer ‘newborn stage’ until 3 months. And since she is technically not 3 months yet, I’m sticking with newborn. She is growing up WAY.TOO.QUICK. But I know, they always do!

So I’m sure you have heard how much life changes when you have a baby, or you already know if you are a parent. It completely changes. I mean everything! Of course we totally LOVE the changes, but some take a little bit of getting used to.

One of them being cooking. Now I know that may sound stupid, but let me explain.

Gabriella is NOT the type of baby that will just be content with sitting in her bouncer, or swing, or pack n’ play. Nothing. She wants to be held non stop. You can maybe get about 10 minutes of entertainment out of the bouncer…and then all of the sudden you hear the scream. She’s OVER it. She wants OUT immediately!

(Don’t mind the following pictures, they are all from my phone, so they are kind of grainy)

G in her Rainforest bouncer 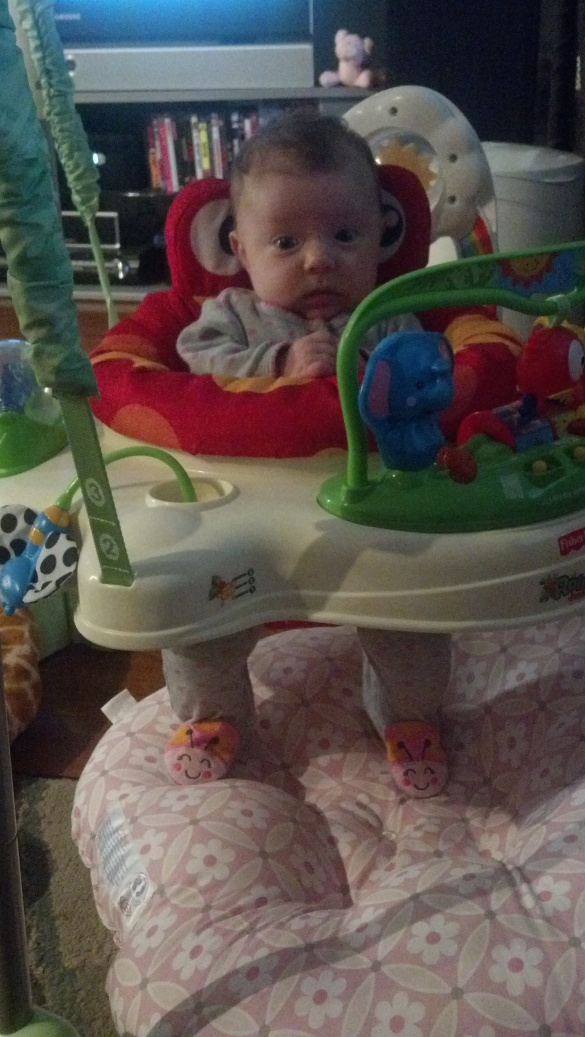 G in her jump a roo. Let me explain this picture so that you can get a good laugh too. You see G is still a bit too little for the jump a roo. So because she is still little for it, I stuck that pillow (thank you Tara, it’s come in handy for things other than just a lounger 🙂 ) underneath of it so that she could reach the ground & bounce around. It is SO FUNNY! I need to tape a video of her in it jumping on the pillow. She still isn’t quite sure what to do with it, so that makes it even better.

On Monday night we had a guest (a friend of Craig’s from college) over for dinner. I prepped everything early so that I wouldn’t be stuck in the kitchen the whole time while he was here. Since Gabriella always wants to be in my arms, and that isn’t always possible while cooking, I had to improvise.

First, she starts in her bouncer.

(don’t mind the eye booger, poor thing has a blocked tear duct, which is very common & usually goes away on it’s own- just a matter of time)

Once she is over the bouncer, I pull the Pack n’ Play into the kitchen & she lays in that & watches her bears.

Then the last resort is the Baby Bjorn. I save this one for last only because it ends up KILLING my back after a while…and she will stay in it for HOURS at a time, she loves it. I just got a few suggestions on my post about my top 10 must haves for a newborn for an Ergo carrier- I looked into it & I think that will be my next purchase for her. It looks like EXACTLY what I need, especially since it can hold up to I believe 45 lbs.

Please don’t laugh at my attire, lack of putting my hair together or putting any make up on…nothing like sporting one of your husband’s shirts all day & looking like a total bum. Just call me a fashionista 😉

I’m just amazed at HOW much she loves that Bjorn. If I put her facing inward (towards me), she falls asleep in about 2.5 seconds. But I was trying to keep her awake the other day because it was getting close to her bedtime..and I didn’t want her to take a nap because she wouldn’t want to go to bed.

But YES, now you see how CRAZY I look when cooking. I swear if you were a fly on the wall you would laugh the whole time. Just because when I don’t have her attached to me, I am constantly singing, dancing & acting like a TOTAL fool so that she keeps laughing 😀

Along with the pasta dish that I made for dinner, I also made dessert. Not just ANY dessert. A Sally dessert. The BEST kind of dessert! 🙂 As you know, I recently became addicted to her website & have a LIST of her recipes to make. I’m slowly crossing them off & I swear each one gets better. Is that even possible?!

The dessert I decided to make was Cake Batter Blondies.  I knew this would be a winner because I mean who doesn’t love cake batter?!?

I followed Sally’s recipe exactly, I just left out the white chocolate chips because I didn’t have any. I also didn’t have the full amount of sprinkles that the recipe call for, but I can assure you it did not matter! These Blondies were OUT OF THIS WORLD.

Preheat oven to 350F degrees.  Spray 9×9 baking dish with nonstick spray. Combine first four ingredients in a large bowl. Add the milk slowly. You want to cake batter to be as dense & thick as possible. Mix in the sprinkles.Pour into prepared baking pan, sprinkle a few more sprinkles on top, and bake for 30-32 minutes until edges are just turning brown. Allow to cool for at least 30 minutes so the center sets, before cutting into squares.

*The blondies will look like they are not fully done because the center will be quite gooey, but that’s what you want! After about 30 minutes of cooling, they will be easy to cut using a serrated knife.

So. So. So. Good. Like you have to take them away from me good. Otherwise I will keep eating them. The best part about them? How moist they are! (& I HATE that word moist, ew, but it’s the only way to describe them) If you do anything today, I suggest you make these. Had a fight with your significant other? Make these. ALL will be forgiven. I promise. 😉

Gabriella wanted to wear something to match the blondies…and I mean, who am I to stop her?! 😉

Hope you have a wonderful day…it’s ALMOST the weekend! Just keep reminding yourself of that if you are having a rough week. 🙂